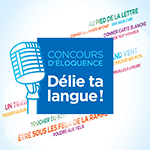 Open to undergraduate students, this tournament aims to promote the use of the French language in a positive, original and dynamic way. The initiative also allows contestants to develop their oratory and public speaking skills.

The very first final will be held on March 20th—the Journée internationale de la Francophonie—at the Cabaret du Lion d’Or. Ten finalists will present an innovative take on a French expression through the use of poetry, rhetoric, argumentation, or other techniques.

A jury chaired by Mr. Lucien Bouchard, premier of Quebec from 1996 to 2001, will listen to and evaluate the finalists. Four prizes will be handed out at the end of the final and the best performance will be rewarded with the Grand Prix Antidote de l’éloquence, which includes a scholarship of $5000. Druide will also hand out a copy of Antidote 10 to every winner.

Druide informatique is delighted to support this competition: as Mr. Guy Breton, rector of Université de Montréal, remarked, Délie ta langue ! combines a love of the French language with the development of useful and sought-after skills.