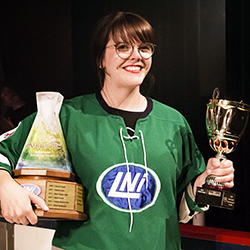 Joëlle Paré-Beaulieu was awarded the Antidote Cup at Club Soda this past Monday for her performances in the 2019 Saison de la Coupe Charade. The Antidote Cup, sponsored by Druide informatique, is awarded to participants for the quality of their French in the “improvisation matches” organized by the Théâtre de la Ligue nationale d’improvisation (LNI).

The Antidote Cup was established in honour of Yvon Leduc, the cofounder of the LNI and a passionate advocate for the French language, who inspired generations of improv artists across the French-speaking world. After each match, an Antidote Star is awarded to the player judged to have used the best French. The player who receives the most Stars throughout the season wins the Cup. In 2019, Joëlle Paré-Beaulieu was awarded the Antidote Star for three of her six regular-season matches.

This year’s Antidote Cup follows a number of previous awards for Joëlle Paré-Beaulieu: she won the 2015 Charade Cup, awarded to the LNI’s best team, as well as three Marcel Sabourin trophies for being the most highly rated player according to her peers. She also won the Beaujeu Cup for the highest-rated player in the 2018 Saison de la Coupe Charade. Joëlle Paré-Beaulieu stars in the TV series 5e rang (Radio-Canada) and L’Échappée (TVA). Her performances in the web series Souper de filles and La pratique du loisir au Canada earned her Gemini nominations. Joëlle’s performances also stood out in the movies Qu’est-ce qu’on fait ici ? by Julie Hivon (she was a finalist in the Best Actress category at the Gala Québec Cinéma 2015) and Stealing Alice by Marc Séguin.

The Théâtre de la Ligue nationale d’improvisation is a professional improv company dedicated to producing, broadcasting and promoting improv shows. These activities reach more than 50,000 people each year. Through its workshops in schools, colleges and universities, the LNI aims to bring culture to young people and to help them develop their creativity.