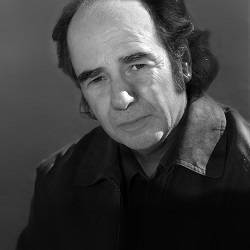 On March 27, novelist, poet and essayist Pierre Ouellet was awarded the Conseil des arts et des lettres du Québec’s Prix du CALQ for creator of the year in the Montérégie region. It was presented at a ceremony organized by Culture Montérégie, attended by around 80 guests, mostly from the Montérégie art scene, as well as other partners and friends of culture.

“The members of the Conseil’s selection committee highlighted the rich, prolific career of an author who never confined himself to a single genre, creating novels, essays, poetry and short stories with equal zeal and creativity. The depth of his thinking and the quality of his work make him a pillar of Quebec literature,” noted Conseil member Céline Lavallée.

The author of 45 books—his most recent being À vie, published by Éditions Druide—Pierre Ouellet has won numerous awards throughout his career. His novel Légende dorée earned him the Académie des lettres du Québec’s Prix Ringuet and his poetry anthology, Dépositions, won a prize at the International Poetry Festival in Trois-Rivières. He has been a two-time winner of the Governor General’s Literary Award for his essays À force de voir : Histoire de regards (2005) and Hors-temps : Poétique de la posthistoire (2008). In 2015, he won the Prix Athanase-David as a crowning achievement of his life’s work. A Saint-Jean-sur-Richelieu resident since 2004, he was presented with a tribute award by the Comité culturel du Haut-Richelieu in recognition of his involvement in the region.